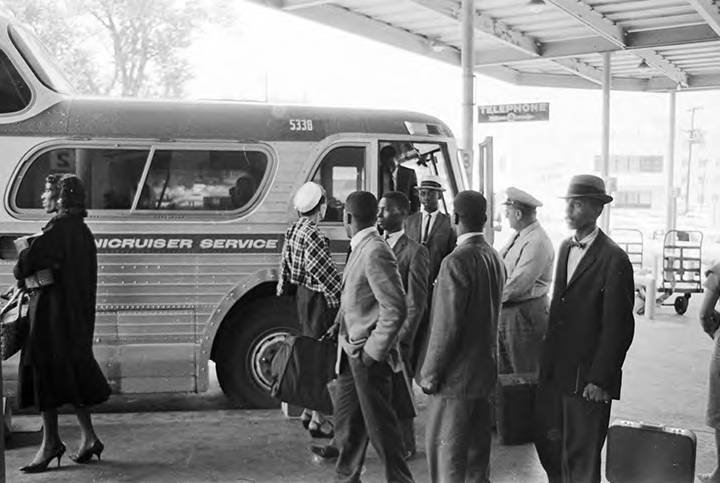 Montgomery's Greyhound Bus Station on May 20, 1961. Photo courtesy of Getty and the Alabama Historical Commission.

The power of place, memory song

Feature story: A reflection on the Freedom Rides of 1961. "If they can do what they did, we can do what we need to do today. Even when it's hard. Even when we're tired and exhausted. Even when others don't care."

Read more from this issue of Mosaic

Reflecting on the Freedom Rides of 1961

This article appears in the Summer 2021 issue of Mosaic, the magazine of the Alabama Humanities Alliance.

Sixty years ago, Montgomery’s Greyhound Bus Station, and many others across the South, witnessed scenes of violence as white mobs attacked Freedom Riders — most of them young people — attempting to force an end to segregated public facilities, including interstate buses, trains, and terminals. In all, some 436 riders, Black and White, participated in more than 90 Freedom Rides in 1961.

Dorothy Walker has a front-row seat to this history. She’s the site director of the Freedom Rides Museum in Montgomery, Alabama, a historic site of the Alabama Historical Commission. The museum, and her office, is housed within the former Greyhound Bus Station. 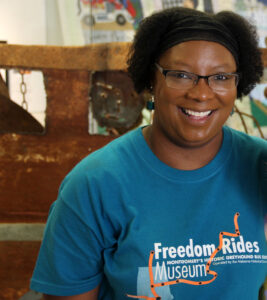 By Dorothy Walker, as told to Phillip Jordan

I never take walking in here for granted. I’m sitting here right now in a space that, 60 years ago, I would not have been allowed inside.

The architecture of segregation is something that needs to be seen and understood. This building was built in 1951. We have parts of the original architect’s blueprints that show, on paper, how this building was designed to be unequal, to separate people. To give one group of people a different experience even though they’re paying the same fare.

If you look closely at this place, it will reveal a lot of the story itself. I’ve seen older people stand in front of what was the separate doorway for Blacks, and weep. They remember having to use that entrance, having to stand outside in the heat or the cold or the rain.

Places matter because they help us see, and hear, and touch the story. People don’t come here to Montgomery, to Birmingham, to Selma, to learn history. You can learn that anywhere, in a book or online, while you’re in your pajamas. People come here, to the Freedom Rides Museum, because they want to feel history. It’s not just a place. It’s the place. It’s where this history happened.

Most visitors here know about Mrs. Rosa Parks and the Montgomery bus boycott. A lot of people think that boycott ended segregation on transportation across the country. They believe that after Mrs. Parks courageously refused to give up her seat, and fueled the Montgomery bus boycotts, people could ride a bus anywhere and sit where they want. But that’s not the case. The Montgomery city buses had no impact on the policies of interstate buses like Greyhound and Trailways — and the trains and airplanes and airports. All modes of interstate travel remained segregated in the South.

Most people don’t know the history of the Freedom Rides. They don’t know that it took another campaign and another courageous group of people to end segregation in interstate travel. The civil rights movement in the 1950s and 1960s was a longer story, with more painful sacrifice, than most people even remember.

Anytime history gets condensed, packaged up a little too neatly, you lose important threads. You forget people that deserve to be remembered, like the Freedom Riders.

I’m very honored to be the site director of this museum and to be the steward of a story like this. It’s important to remember that it didn’t happen that long ago. And, too often, it’s history that many folks can still relate to. People come in, read a panel, and come over to my desk and ask, “Now when was this?” I’ll say, “1961.” And they’ll say, “This literally could have been written about something yesterday.”

My favorite thing to do is to humanize the Freedom Riders. If people know the story at all, they usually come with this visual in their head of this large group of people. Freedom Riders who are mostly nameless and faceless. So, I tell visitors the names and their stories. I show them faces. I remind them that a lot of the Freedom Riders were 18-, 19-, 20-year-old kids.

I tell them about Dr. Catherine Burks-Brooks, a Freedom Rider who was one of seven female students who arrived on the bus here in Montgomery — two White females and five Black females. When they were attacked by the mob here, they all ran to a nearby cab. The Black driver jumps out and says, “I can’t take the White girls.” At the time, there was a segregation ordinance that forbade Blacks and Whites from riding in the same vehicle. Well, Catherine, who was 21, says, “We’re not leaving them, these are our friends. Give me the keys. I’ll drive the car!”

I tell them about Hezekiah Watkins, 13, the youngest Freedom Rider, who showed up at a protest in Jackson, Mississippi. He was arrested and spent five days on Death Row in Parchman (Mississippi State Penitentiary) before they realized they were holding a child. His mother not knowing where he was for five days, was overcome with emotion after finding him alive there.

I tell them about Dr. Bernard Lafayette, a Freedom Rider who also organized sit-ins during the Nashville Student Movement. He tells a story of a sit-in at a lunch counter where this guy holds up a lighter to the hair of a female student. Dr. Lafayette could smell it smoldering. He doesn’t get violent, but he puts his hand over her head and tries to put it out.

Dr. Lafayette recalls the student turning to him, giving him this very serious look, and saying: “Please do not interfere with my suffering. My suffering is what people have to see for change to happen.”

Ten years ago, when the Museum opened and I started giving tours, my kids were in elementary school. I thought, if my children ever called me and said they want to participate in some dangerous but courageous fight for freedom, I’d be proud. Scared, but proud of the sacrifice they were willing to make.

Well, last summer, during the Black Lives Matter protests, I got that call. My oldest daughter calls me and says, “Mom, I want to go to a protest.” And my first reaction was: “Is there something else you can do behind the scenes? Is there another role for you?” She heard that as hypocritical. My daughter said, “You’ve told me these stories, you’ve given me these values. You’ve told me it takes courageous people willing to sacrifice to make change happen. And now you don’t want me to act on what you taught me?”

She couldn’t wrap her head around why I was saying this to her. But she’s not a mom. I thought about the Freedom Riders during that phone call. But I mostly thought about my daughter. Who could be hit with a rubber bullet. Or arrested. Or assaulted. I could only think of what harm could possibly come to her. After all I’d learned, I wasn’t strong enough to say, “I support you and I understand this is something you need to do.” I didn’t have the moment I thought I would, the moment I envisioned 10 years earlier.

My daughter went to her protest. I didn’t lose her and nothing terrible happened where she was. But now, sometimes I share my own story with the families that come into the museum. It starts conversations between parents and their children they’ve never had before.

If nothing else works, if nothing is connecting, then I start singing to visitors. Music is a common language we all share. And music is what got these Freedom Riders through difficult times. After everything they went through 60 years ago — beaten, bombed, bruised —  they weren’t broken. They were singing.

That should make us feel encouraged. If they could go through all of that and still feel hopeful, then what we’re going through right now, our country and our communities, surely, we can see the humanity in each other the way these Freedom Riders did.

The few times that Freedom Riders were asked if they wanted to press charges against their assailants, they said: “No, that’s my brother, that’s my sister.”

If they can do what they did, we can do what we need to do today. Even when it’s hard. Even when we’re tired and exhausted. Even when others don’t care. Their story gives us the courage and inspiration to continue because what we’re doing matters.

Their story also gives me my song. I wake up every morning and walk in here, singing, even if it’s just in my head:

Woke up this morning
With my mind stayed on freedom

Dorothy Walker is the site director of the Freedom Rides Museum in Montgomery, Alabama, a historic site of the Alabama Historical Commission.

Sixty years after the Freedom Riders made history with their courageous and groundbreaking acts of nonviolence in the struggle for civil rights, their stories resonate as a key component of Alabama Humanities Alliance programs.

Their Greyhound bus firebombed and riders beaten in Anniston, students on a separate bus menaced and bloodied in Birmingham, and later also viciously attacked in Montgomery, the Freedom Rides are an integral part of Alabama and national history. The experiences of those college students — Black and White — form the narrative of teacher training this year in AHA’s SUPER Teacher workshops.

The Rev. Bernard Lafayette, a Freedom Rider and contemporary of Martin Luther King, Jr., and John Lewis, recalled to a group of Alabama school teachers in a SUPER workshop session earlier this year his experiences during the civil rights movement and how those times relate to the ongoing racial justice reckoning sparked by the 2020 murder of George Floyd in Minneapolis.

“There comes a time when you have to take a stand and be recognized as a human being,” Lafayette says.

Lafayette, now 80, and the few other Freedom Riders who are still alive, give teachers and historians alike a deeper understanding unrivaled by books. He also discussed leading the voter registration campaign in Selma from 1962 to 1965, where he survived an assassination attempt.

In a separate Freedom Rides 60th anniversary event in May at the landmark Bethel Baptist Church in Birmingham, co-sponsored by the Alabama Humanities Alliance, Freedom Riders Charles Person, Catherine Burks-Brooks, and Hank Thomas gave testimony to their experiences in the face of angry white mobs and the need for change — then and now.

What better way to engage, enlighten, and inspire than to hear from, and talk with, the actual shapers of history?

AHA’s SUPER Teacher workshops offer professional development for teachers across the state on a variety of historical topics, which in the past year have focused on the civil rights movement and the suffragist movement. These sessions, organized with the help of university scholars and noted historians, seek to give classroom educators a sense of history and understanding in order to help them better convey lessons to their students.

“The Freedom Rides session is a good example — teachers not only read about history, but interact with those who lived it,” says Chuck Holmes, executive director of the Alabama Humanities Alliance. “We hope that our SUPER workshops supplement the teacher’s toolkit and give our educators relevant content and some added inspiration to make history come alive in the classroom.”

The aim of SUPER Teacher is to increase participants’ subject knowledge and, in turn, their confidence, enthusiasm, and effectiveness as educators.